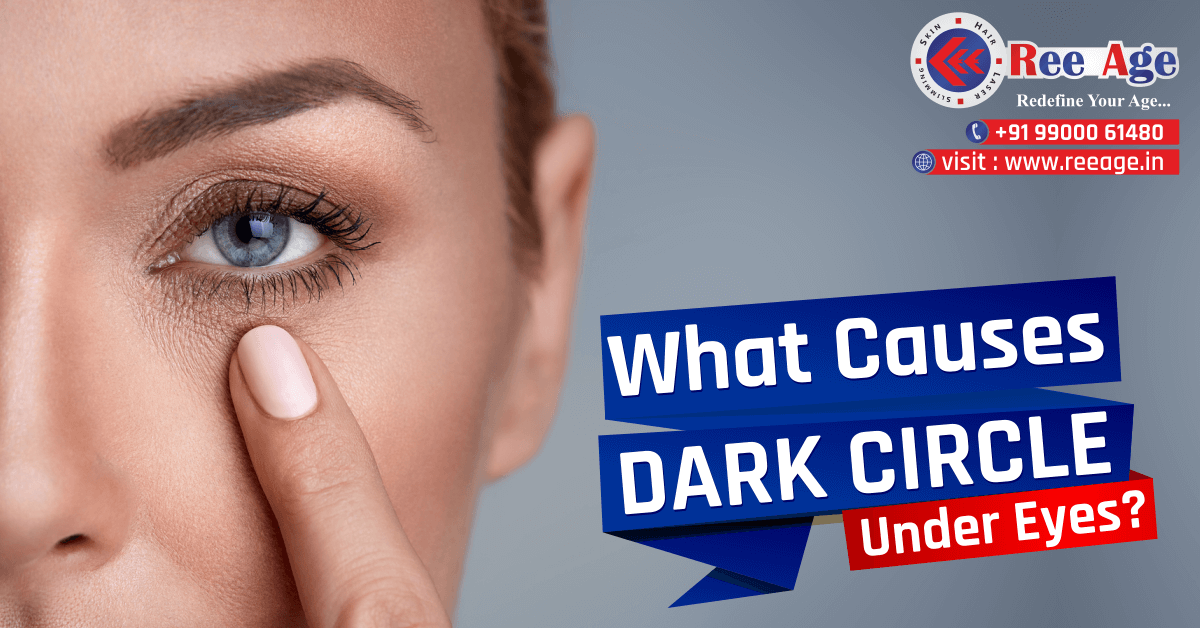 What Causes Dark Circles Under Eyes?

At one time or another, most people are plagued with dark circles under their eyes. Whether you are overly tired, aging or suffering from allergies, you may be faced with dark circles in your mirror.
However, while they are not dangerous to your health, the condition does have a psychological effect on how you see yourself and what others think when they meet you. Despite warnings not to make first impressions from the way others look, the reality is that virtually everyone does it.1
There are changes you can make that will reduce the appearance of dark circles under your eyes. Some are easy and others are a bit more challenging. However, the result will be that you’ll no longer look as tired and worn-out when you first get up in the morning.
Thin Skin and the Color of Your Blood
The reasons for dark circles are varied, but they all start with the difference in thickness of the skin around your eyes. This is called the periorbital area. In most areas of your body, the skin is between 2 and 3 millimeters (mm) thick. However, under the eyes the skin is normally 0.5 mm in thickness.
Thinner skin means the blood vessels under your skin are more visible to the naked eye and produce a different color to your skin. Here’s where what you see on the surface is a reflection of what’s directly below.
Your skin and the tissue directly below the outside layer of skin, called the subcutaneous tissue, only allow blue or violet wavelengths to pass through. This results in your veins appearing blue, because only the blue light is reflected back.2
This reflected color is different if you have darker or whiter (albino) skin. In the former case, the veins will appear green or brown and in the latter, dark purple or dark red.
This is just one of the reasons dark circles appear below your eyes. You are more likely to see the bluish hint of blood vessels below your eyes, compared to thicker skinned areas of your body. As you age, your skin also loses collagen and elasticity, making the skin thinner and your circles more prominent.
Not All Dark Circles Are Created Equally
Not all circles are due to the visibility of your blood vessels beneath thin skin, though. While this is a common reason, and a higher probability if you are genetically more prone to thin skin under the eyes, it isn’t the only reason.
The second type of circle is caused from hyper pigmentation of the skin under the eyes and is more commonly brown in color.3 This hyper pigmentation, or higher amount of pigmentation in the skin, is the result of more melanin being produced in the skin under the eyes.
This particular condition is more noticeable in people whose skin is normally darker or has more pigmentation. In a study by the Pandit Deendayal Upadhyay Medical College in India, researchers found dark circles under the eyes was the most common condition found in a routine dermatology practice.4
This type of dark circles caused by hyper pigmentation can have either a primary or secondary cause. In a primary cause the increased pigmentation is found under both eyes and occurs spontaneously. In a secondary cause, the increased pigmentation is caused by a systemic or localized process.5
Some of the causes believed to contribute to hyper pigmentation around the periorbital area are temporary and resolve after the irritant has been removed. Possible temporary and permanent triggers for periorbital hyper pigmentation include:6
Dark circles under your eyes may also be triggered from the oxidation of blood leaking from the blood vessels around the eyes. The release of blood and oxidation leads to not only dark circles, but also swelling and bags under your eyes.7
This occurs when the body attempts to clear blood leakage from a thin-skinned area easily affected by gravity.
This condition is relatively harmless to your health, but can be a challenge to deal with. There are surgical and medical treatments available to stop the blood leaking, but it is best to start with lifestyle changes and nutrition to treat the condition and avoid other more invasive options.
Bags with Your Dark Circles?
Another condition that can make your dark circles appear even darker and more noticeable is swelling under the eyes, commonly called bags. When you are young, this swelling may be caused by allergic reactions, illness or an excessive buildup of fluid in your body.8
As you age there are yet other reasons for developing puffiness and swelling under your eyes. The effect of gravity on tissue that is slowly losing collagen and elasticity can result in tissue sagging. This includes the fat under your eye tissue.9
Fat deposits around your eyes help protect them. As you age, fat may escape from the membrane normally containing it, resulting in the fat falling beneath the eye, causing bagging.
However, in recent research published in Clinical Neurophysiology, scientists discovered the possibility of another reason for the fat deposits beneath your eyes.
Plastic surgeons from California found that in study participants, it wasn’t the fat that escaped the membranes with age, but rather the body produced more fat in the eye area, creating the bags.10
The exact mechanism of the fat deposits beneath the eye may not be completely understood, but doctors recognize the increased risk of bags under your eyes as you age.
Although you might be tempted to point the finger at a lack of sleep and rest to the increasing size of the bags under your eyes, there is no scientific proof linking this cause and effect. However, lack of sleep does increase the severity of the puffiness under your eyes, especially first thing in the morning.